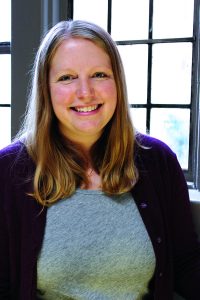 Stephanie Kivlin, an assistant professor of ecology and evolutionary biology, coauthored a paper titled “Fungal aerobiota are not affected by time nor environment over a 13-y time series at the Mauna Loa Observatory,” published in the journal Proceedings of the National Academy of Sciences.

“One of the big questions in microbial ecology is trying to figure out how microbes disperse around the world and if they can disperse everywhere,” Kivlin said.

Kivlin and other researchers from the University of Hawaii initially genetically sequenced fungal spores and studied their traits, such as size and shape, before discovering the role wind patterns play in fungal spore dispersal.

“What we found was that we could trace back wind patterns to try to understand where the wind was coming from that deposited the fungal spores on the filters,” Kivlin said. “We saw some that were coming from Asia, bringing fungi that are never found in Hawaii. The wind patterns are really what’s blowing the fungi around.”

The researchers also discovered that some airborne fungal spores are still viable after traveling long distances.

“Because we found a couple of fungi that were dispersing all the way across the Pacific Ocean, we need to really consider how far fungi can go and what that means for dispersal of new pathogens into new areas,” Kivlin said. “We need to have better theory about how often those dispersal events occur, which fungi are coming, and if they are beneficial or harmful.”