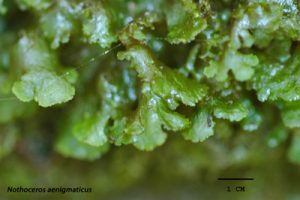 Kenneth McFarland, emeritus greenhouse manager and lecturer in the UT Department of Ecology and Evolutionary Biology, recently co-authored a paper in Frontiers in Plant Science titled “Population Genomics and Phylogeography of a Clonal Bryophyte With Spatially Separated Sexes and Extreme Sex Ratios.”

In their study, researchers focused on the southern Appalachian clonal hornwort, Nothoceros aenigmaticus, which grows on rocks near or submerged in streams in watersheds of the Tennessee and Alabama Rivers. This hornwort is a good example of a plant that reproduces asexually and clonally as its male plants seem to produce non-functional sperm cells. It is distributed in southern Appalachia, Mexico, and in “alpine” regions of tropical South America.

“Early bryophyte taxonomists noted the existence of this plant in the Southern Appalachian Mountains, but hesitated naming it for lack of any sexual reproductive structures that would define it as a liverwort or hornwort,” McFarland said. “After these sexual reproduction structures were discovered, it was finally named and classified as a hornwort. This was not the end of the story. The next surprising discovery was that the species had a limited distribution and the two sexes were isolated from each other. “

Unlike elsewhere in its range, male and female plants in the US are geographically separated by ca. 30 km across rivers and mountains, as they grow on rocks in different watersheds of the Tennessee and Alabama Rivers.

“Whether male and female populations were geographically isolated to the extent that migration, and sporadic sexual reproduction was completely absent, and hence whether these populations relied always exclusively on asexual propagation was unknown,” McFarland said. “Resolving this uncertainty is critical to assess the vulnerability of these populations to environmental change.”

To confirm the total reproductive isolation, reconstruct its origin, and assess the mode of reproduction of N. aenigmaticus in southern Appalachia, researchers analyzed genetic data of more than 250 individuals of the species. Nothoceros aenigmaticus likely immigrated to the US from sexual Mexican ancestors about 600–800,000 years ago. The genomic data confirmed the absolute reproductive isolation between sexes and the absolute genetic isolation among southern Appalachian populations.

“The southern Appalachian drainage system is thought to have been remodeled by geological processes during the Pleistocene glaciations, which could have mixed genotypes from contiguous watersheds,” McFarland said.

Populations from contiguous watersheds share clones, but individuals lack mixed genetic traits, consistent with the lack of sexual reproduction, as is their overall reduced genetic diversity. This low extant genetic diversity and the extreme sex segregation point out the high vulnerability of N. aenigmaticus to extinction in southern Appalachia under major alteration of the habitats.

“Even though there are still unanswered questions, with the use of DNA technology, this publication has greatly expanded our understanding of the complex nature of N. aenigmaticus,” McFarland said.