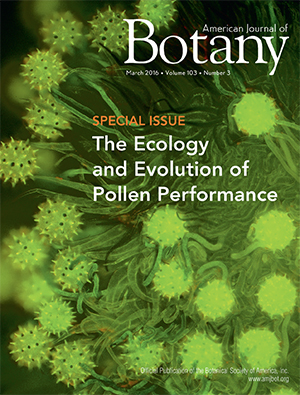 As an undergraduate, Joe Williams became fascinated by the often bizarre ways plants have sex.

“Who would have thought that the Ginkgo tree shedding pollen in the back yard was actually sending out tiny plants inside its pollen grains?” says Williams, professor of plant evolutionary biology and chair of graduate affairs in EEB.

As a student, Williams realized the complexity of reproduction in flowering plants might cause evolution to happen faster.

“Pollen competes for access to eggs, and competition is much more intense in flowering plants than in other seed plants like the Ginkgo, because plants with flowers are so often insect-pollinated,” says Williams. “Each insect visit brings a lot of pollen grains to a flower, which all start the race to the egg at the same time.”

Williams has worked over the past 15 years reconstructing ancient aspects of pollen performance in flowering plants. Because scientists are unable to study pollen competitive ability in the fossil record, Williams focused on living proxies within ancient extant lineages of flowering plants.

“If I could choose one word to describe the performance of pollen from these species, it would be slow!” says Williams.

Now, Williams is interested in the role of pollen in how the big winners in flowering plant evolution – weeds and annuals – evolved their exceptionally rapid life histories.