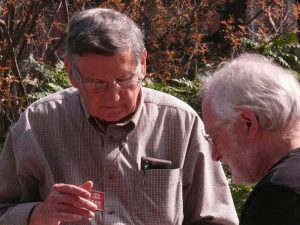 Members of the Department of Ecology and Evolutionary Biology recognize and are proud of the long history of programs for conservation of natural resources and the promotion of human welfare that Tom Gilbert (BA ‘50, MS ‘52) has envisioned and led throughout much of the world.

In his long career, Tom served in numerous positions with the US National Park Service, including as chief of the NPS Environmental Education Program and as associate chief scientist for natural area preservation. He was project leader for joint NPS and US Agency for International Development (USAID) projects in India and Africa, was the UNESCO Man and the Biosphere coordinator for the US-USSR. Summit Agreement on Biosphere Reserves, was field director of the USAID Environmental Training and Management Project (12 country effort) and was the leader of the US delegation to the Third World Congress on Biosphere Reserves.

Tom’s contributions and achievements in natural areas conservation are long and significant. He worked for many years in Africa, India, and Central America where he planned natural area reserves and natural parks. He was pivotal from the earliest stages in planning and promoting UNESCO International Biosphere Reserves throughout the world, including the establishment of Great Smoky Mountains National Park as one of the world’s first International Biosphere Reserves in 1976. Tom remains a leader in the Man and Biosphere program and is a founder of the Southern Appalachian Man and Biosphere (SAMAB) Cooperative.  Most recently, Tom has led the SAMAB collaboration for the Conservation of Culturally Significant Plants with the Eastern Band of the Cherokee Indians, and he is working to engage EEB, Department of Forestry Wildlife and Fisheries, and the Environmental Science Division at Oak Ridge National Lab in SAMAB leadership.

Tom is and has been for a long time, a world’s leader in international conservation, the preservation of public lands, and human resource development. At 93 years of age, Tom remains a visionary who is actively and energetically engaged in conservation initiatives. Tom Gilbert is recognized with the 2021 UT National Alumni Association Award for Professional Achievement. EEB is in awe and proud of Tom’s achievements.