The UT Etnier Ichthyology Collection (UTEIC) was established in 1965 when Professor David A. Etnier started collecting fish specimens from throughout the state for teaching and research purposes. At the time, little was known about fish diversity in the region, which made identification challenging. The need for a collection became apparent to Etnier, so he began sampling fishes from the many river systems in Tennessee. The UTEIC now holds approximately 425,000 specimens, a staggering number for a young collection, gathered from nearly all 50 states, Gulf of Mexico, Mexico, South America, Africa, Australia, New Zealand, Antarctica, Russia, and the Atlantic and Pacific oceans. 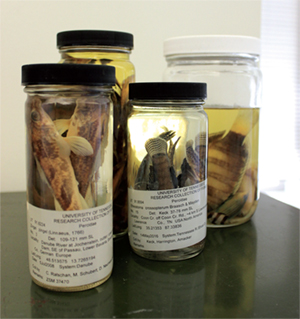 With more than 40,000 jars of specimens, it is the largest fish collection in the state of Tennessee and one of the most valuable in the southeastern United States. It has become a highly celebrated, nationally renowned biological archive. In fact, many southeastern US specimens in the collection have prompted the discovery of new species and have been used to study the effects of climate change and water quality on aquatic communities. The UTEIC is considered the most comprehensive tool enabling researchers to identify and predict changes in where fishes live and the size of their populations throughout Tennessee.

While UTEIC contains collections from all over the world, the bulk of its holdings come from east of the Rocky Mountains in North America, most notably from biological hotspots in the Southeastern region. Over the years, the UTEIC has served as a critical repository, possessing substantial inventories, such as samples from regional monitoring surveys spanning more than 50 years provided by the Tennessee Valley Authority and the Tennessee Wildlife Resources Agency. Among these holdings is a significant representation of southeastern jeopardized species.

The collection has also served as an invaluable resource for researchers, private agencies, and governmental organizations. The loan program processes hundreds of outgoing fish and tissue biopsies for DNA extraction each year. Requests for data associated with the specimens are constant. Since its establishment, the studies of at least 45 PhD and MSc students incorporated existing data or produced new data from the collection. Fish specimens used in more than 100 publications embodying the research of Etnier and his students are vouchered in the UTEIC, including 269 lots (2,995 specimens) of designated paratypes. The UTEIC is an invaluable resource for teaching purposes, providing specimens for classes in both ichthyology and vertebrate biology. Additionally, undergraduate students complete independent research projects using UTEIC specimens and data from the collection. 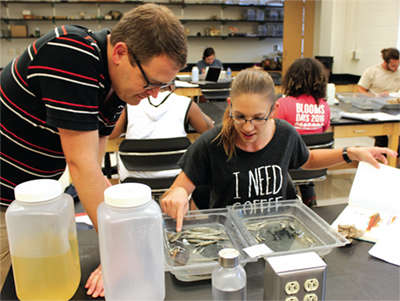 Natural history collections such as the UTEIC are becoming increasingly important as researchers become more interested in how organisms are related, interact with each other, and respond to largely human-caused and relatively rapid changes in global environments. In these areas, the UTEIC is very much an active and growing collection. Our current curator, Benjamin Keck, has described new species, including the Tennessee Logperch (Percina apina). He works with other EEB faculty to examine how land use patterns are associated with fish communities and serves on advisory committees for US Fish and Wildlife Service reviews of endangered species, including the famous snail darter (Percina tanasi).

UTEIC’s new and vibrant online presence expands contribution to knowledge about aquatic resources. Researchers at other institutions and government agencies can quickly access the data, request loans, predict occurrences for survey work, and generally increase the number of studies possible. In the future, staff would also like to develop teaching modules for a broad range of educators based on the data. For instance, a community ecology lesson could allow students to pick a local creek or river, use UTEIC data to determine which species occur there, and then explore the ecology of the individual species to predict community interactions.

Several years ago, Professor Etnier created the Etnier Ichthyology Collection Endowment. The endowment provides financial resources to help maintain and improve the collection. The endowment pays for the bulk of the supplies necessary for maintenance and collaboration efforts (alcohol, glassware, shipping materials, and fees). The ultimate goal, however, is to increase the endowment to the level necessary to support the growth of EEB outreach programs, facilitate critical storage improvements and, eventually, endow the UTEIC curator position.

Alumni and friends who support the endowment will help ensure the viability of this valuable collection. For more information about the Collection and the Endowment, contact Jennifer Brummett at 865-974-1948 or email her at jparris@utk.edu.