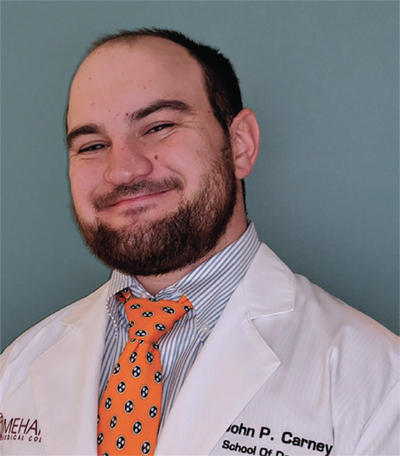 Pursuing his DDS at Meharry Medical College in Nashville, Tennessee, John Patrick (J.P.) Carney (’13) begins his fourth and final year of dental school this fall. He will graduate May 2019. A graduate from the University of Tennessee, Knoxville, Carney received his BS in biological sciences with a concentration in ecology and evolutionary biology. Before he began his first year at UT, Carney knew he wanted to become a dentist.

Although biochemistry and cellular and molecular biology and chemistry are two of the traditional pre-dental majors, Carney declared his major in biological sciences with a concentration in EEB. He decided on an untraditional concentration after becoming acquainted with other pre-health students in his prerequisite classes. With most of the requirements completed, Carney discovered his niche, electing to focus his studies in the area that would allow him to stand out during the intensely competitive environment of dental school admissions. The experience of EEB allowed Carney to master the art of communication, which contributes to his success in dental school. Likewise, the correlation of lecture topics with weekly field trips to places like Ijams Nature Center and the Knoxville Zoo allowed members of the EEB department to find balance in real world application of knowledge.

The study of ecology and evolutionary biology is a prime example of the way people can benefit from having diversity in the classroom and in life. Carney found an environment of great diversity waiting for him at Meharry Medical College, a school that welcomes all to its campus and exemplifies the concept of diversity. The diversity among dental students created an inclusive atmosphere that facilitated the treatment of patients from all around the world. This level of diversity taught Carney an important concept in healthcare: cultural competency, a factor that can impact overall patient satisfaction and quality of care. More diversity in the classroom or a healthcare setting can ultimately lead to substantially improved interprofessional collaboration, which can help reduce medical errors, improve the quality of care, and meet the needs of diverse populations. Taking in different perspectives on problems facing the healthcare industry is key to finding solutions and providing patients with optimal care and satisfaction.

Carney looks forward to utilizing the lessons he learned in EEB in his future practice. As a general dentist, he plans to further his knowledge in implant dentistry to provide patients the highest standard of dental care. Knoxville will always be home sweet home, and he knows that the future is bright on Rocky Top.