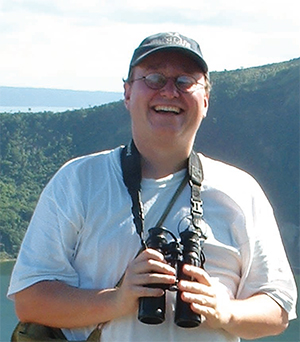 When Thomas Brooks (’98) graduated from the University of Cambridge with a degree in geography, he wanted to focus his PhD work on tropical conservation. There was one problem – no one in the United Kingdom was interested in taking him on as a student.

“I wrote to several professors to explore my options, but in those days, conservation science was often seen as requiring a biology degree,” Brooks says.

He got a break when one of the professors recommended he contact Stuart Pimm in the Department of Ecology and Evolutionary Biology at UT.

“The professor said he heard Pimm was recruiting graduate students to work on multidisciplinary conservation,” Brooks says. “The rest is history!”

Brooks now serves as the chief scientist of the International Union for the Conservation of Nature (IUCN). He has had a distinguished national career in conservation biology that all started in 1994 when he left his home in the United Kingdom to attend graduate school in the United States; a place he had visited only once before.

He arrived on campus during a period of transition for the department, but quickly settled into his PhD work on predicting bird extinctions following tropical deforestation. His arrival at UT also brought a new experience for Brooks: teaching a general biology course.

“I’d never taught before, so being thrown in the deep end to teach general biology was as good a sink-or-swim experience as I’ve ever had,” says Brooks, who eventually had an opportunity to serve as a teaching assistant for ornithology and conservation biology courses, which is closer to his expertise.

His time in EEB was fundamental in setting him on his current career path, and he credits Pimm for much of it.

“He insisted that his graduate students learn skills in grant writing, peer review of manuscripts, and, above all, in writing scientific papers,” Brooks says.

The rigorous PhD work paid off. Brooks has authored over 200 publications and has secured approximately $9 million in major grants, including one from the National Geographic Society, which funded his PhD fieldwork in Kenya.

He still collaborates with fellow EEB graduates and professors, including Sandy Echternacht, former head of the department.

“I was delighted to renew acquaintance with Sandy when the two of us worked together on the IUCN Red List assessment of Caribbean reptiles last year,” Brooks says.

His most enduring memory of his time in Tennessee, however, is the genuine friendliness he experienced with everyone he met.

“Knoxville was a wonderfully hospitable place to work through the great challenges and joys of PhD research,” Brooks says.