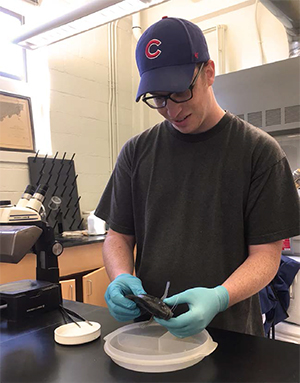 Sam Borstein is studying how dietary specialization may affect evolutionary patterns using ray-finned fishes as a study system. Ray-finned fishes are extremely diverse in their feeding habits and prey on a wide variety of resources, including filtering plankton from the water, foraging for algae, and actively hunting other fish. How effectively the fish feed is closely connected to their physical anatomy, especially how well the fish can maneuver and capture prey. Some physical traits are thought to lead to increased speciation or decreased extinction rates (known as key innovations), but may limit possible flexibility in diet evolution.

Sam’s NSF-DDIG funding allows him to generate genomic sequence data, to understand how species of ray-finned fishes are related, and to provide an evolutionary framework to study how diet evolution effects phenotypic evolution in fishes. Borstein uses high-speed video to film exactly how fish capture prey.

“Fish predominantly use two methods to capture prey, either biting at a food source or generating suction with their jaws to suck prey into their mouths,” Sam says. “These feeding events can occur in a fraction of a second, so to actually investigate how fish feed, we need to use high-speed video cameras as you cannot actually see in detail how they ingest prey with the naked eye.”

Results so far suggest that, contrary to expectations from ecological theory, fish species that feed on a single prey source have faster rates of morphological evolution, as well as more unique combinations of traits. This indicates that while species may specialize to feed on a single food type, it does not constrain their morphological evolution, and there are multiple ways to exploit the same food source, which may help limit the effects of direct competition.