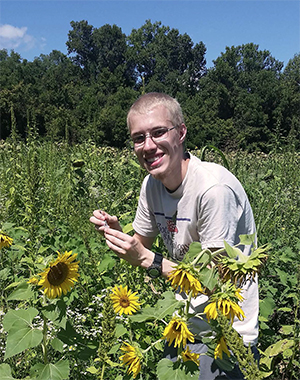 Chandler Brown, an undergraduate working in the Williams Lab, entered his first plants-focused class already intrigued by the evolution of these beautiful organisms. He came to college for this class. With the acquaintance of Professor Joe Williams, his foot was in the door.

He started on a promising project on the dispersal ecology of pollen grains. When pollen disperses, it is either in a sexually immature bicellular state or in a sexually mature tricellular state. Researchers hypothesize that tricellular pollen has a higher water content than bicellular pollen because pollen is typically arrested in development at the bicellular stage when it undergoes dehydration in preparation for dispersal. If pollen fails to undergo dehydration, development might proceed to the mature tricellular stage. To understand pollen water content, Chandler compared the size of fresh mature pollen to its oven-dried size and to its fully hydrated size in 30 species. If fresh pollen is closer to its dried size, it must disperse in a very dehydrated state. Conversely, if it is close to its hydrated size it must have high water content. Pollen with high water content is metabolically active and can germinate faster. As such, metabolically active pollen has a higher competitive ability, an advantage that might explain why tricellular species originated from bicellular species in multiple instances.

This project has allowed Chandler to gain many new insights into biology and a sense of responsibility and independence while working in the lab and field. The research done in a lab allows students to develop broad skills necessary for almost any profession. Chandler learned various methods that might be applicable in many biological labs and more specifically in his field of plant biology. In addition to being honored with the knowledge of natural history in the field, he was offered a summer research grant based on the significance of his project, which allowed him to make a living within the EEB program before getting his degree. He is considering graduate school, and with this honor’s thesis project under his belt, his chances of being accepted have increased. He is very appreciative of all the great opportunities offered to him throughout his undergraduate career and looks forward to his future in plant research.