Professor Daniel Simberloff and postdoc Christy Leppanen have been awarded a $16,500 grant from The Eppley Foundation for Research for their proposal:  Effects of Evolutionary Ecology and Ecosystem Variability in Native and Introduced Predator-Prey Systems. 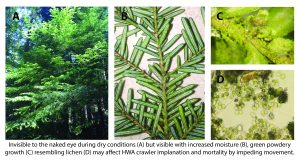 Simberloff and Leppanen study interactions involving introduced predators and their prey, the hemlock woolly adelgid, Adelges tsugae, or HWA.  A sap-feeding insect native to Asia, HWA has spread to eastern North America where infestations have caused sharp declines in native hemlocks, including in some locations complete losses of eastern hemlock and Carolina hemlock, which is now vulnerable to extinction.  Predators transplanted from Asia are considered a long-term solution.  Little is known, however, about HWA and predator behavior and interactions in their native or introduced ranges.

Funds from the Eppley Foundation will be used to study HWA where it is introduced and native, where trees seem relatively unharmed by the insect.  Hemlock species, climate, and invertebrate communities differ between native and invaded areas.  Simberloff and Leppanen are interested in understanding what influences HWA population size, for example, whether predators experience different levels of success in their native and introduced habitats, much like HWA imparts different levels of damage where it is native and introduced.  They suspect that HWA control likely involves a variety of influences and interactions that vary by location.  In their research, they will evaluate interactions involving HWA, its predators, and other native and non-native species in different locations.  For example, they have documented and will assess the significance of predator entrapment in droplets of HWA’s liquid waste, a previously unreported phenomenon that may influence predator success and thus HWA populations; and, if the outcome of entrapment differs by predator species, HWA populations may differ further where predator communities differ.  They will also consider interactions among mites, lichen, and another invasive predator, the multicolored Asian lady beetle, Harmonia axyridis, which shares its native range with HWA.

The results of this research will be included in a review of what is known about evolutionary ecology and ecosystem variability in native and non-native HWA systems relevant to its population size and impacts.  This is a model system with broad applicability in education; information from the review will also be used to develop a teaching lesson.

The Eppley Foundation for Research was incorporated in 1947 for the purpose of “increasing knowledge in pure or applied science…in chemistry, physics and biology through study, research and publication.”  The Foundation funds projects in biological and physical sciences. Particular areas of interest include innovative medical investigations, endangered species and ecosystems in the U.S. and abroad, and climate change.