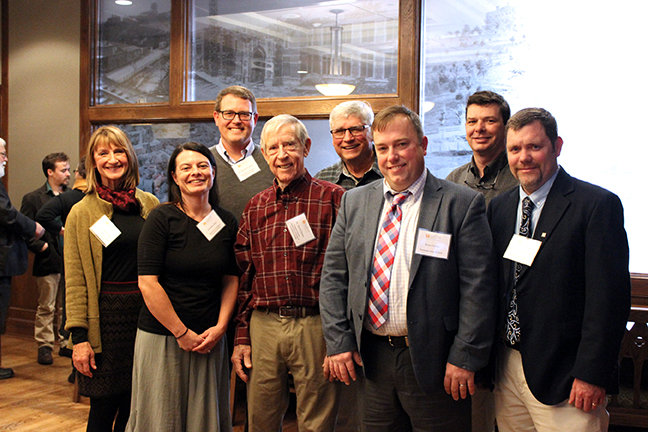 TVA representatives join Etnier, Kalisz, and Ichthyology staff for photo before the reception.

Representatives from the Tennessee Valley Authority and the Tennessee Wildlife Resources Agency announced the establishment of the Etnier Ichthyology Endowment at a reception on the University of Tennessee, Knoxville, campus Thursday, December 14.

“TVA is proud to be partners with the University of Tennessee, and David Etnier has been a big part of that partnership for more than 50 years,” says Evan Crews, senior manager for Natural Resource Management at the Tennessee Valley Authority. “We are thankful for the opportunity to support the UT Etnier Ichthyology Collection. This facility is a vital resource for all of us who work to improve aquatic biodiversity and protect the aquatic life that thrives in the Tennessee River and its tributaries.” 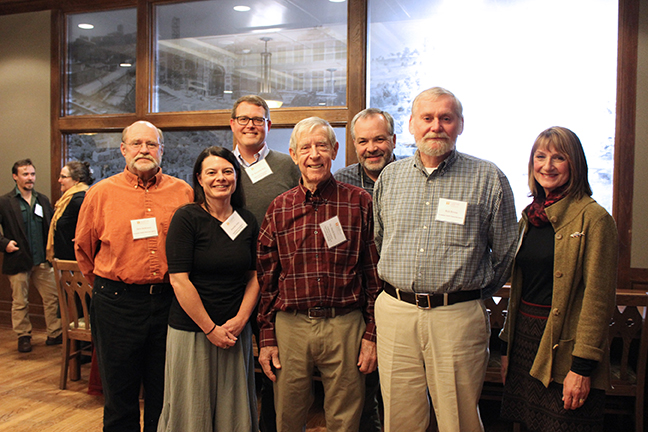 TWRA representatives join Etnier, Kalisz, and Ichthyology staff for photo before the reception.

The endowment will provide support to continue the research conducted at the UT Etnier Ichthyology Collection, a facility used for undergraduate, graduate, and professional teaching and research. It also serves as a significant public resource.

“What started out to be a simple opportunity to celebrate the Tennessee Valley Authority’s generous donation to the Etnier Endowment quickly evolved into celebrating Tennessee Wildlife Resources Agency’s generosity and that of so many others,” says Susan Kalisz, professor and head, Department of Ecology and Evolutionary Biology. “Today we celebrate the incredible dedication of David Etnier to persevere through many trials and tribulations and to create an impressive group of advocates and partners over the past five decades while creating a world class Ichthyology Collection and program.”

The Etnier Ichthyology Collection has more than 500,000 fish specimens from all over the world and serves as a significant resource for the research community. Several specimens in the collection were significant for discovering new species. Other specimens help scientists study the impact of global warming and water quality on aquatic communities. For nearly 40 years, the collection has served as a repository and reference for private and governmental agencies working on the fishes of the Southeastern United States.

“As an agency, we are dedicated to protect, manage, conserve, and restore the natural resources in the state,” says Dave McKinney, chief, Environmental Services for the Tennessee Wildlife Resources Agency. “None of this would get done, however, without the collaboration between our agency, TVA, and Professor Etnier’s work at UT. We are truly lucky to have a great resource such as the Ichthyology Collection available to help us fulfill our mission.”

David Etnier began collecting fish for teaching and research on the fauna of Tennessee and surrounding states in the 1960s. Fifty years later, the UT Etnier Ichthyology Collection is the largest fish collection in the state of Tennessee and the third largest overall in the Southeastern United States.

“We have more than 320 fish species in East Tennessee alone,” says Etnier, professor emeritus in the Department of Ecology and Evolutionary Biology. “When I arrived on campus, 25 of those were undescribed. We had names and localities for the fish, but that’s about it, so I decided to write a book.”

His book, The Fishes of Tennessee, first published in 1993, is considered an authoritative source on the diversity of freshwater fauna in Tennessee. Throughout his career, Etnier taught graduate students how to identify, collect, and preserve hundreds of fish species.

One of the first projects involved studying river systems with unknown fish faunas. Etnier, graduate students, and TVA fisheries biologists travelled to the University of Michigan Museum of Zoology, which at that time was the primary repository for fishes from the entire Tennessee River system. Several of the Tennessee specimens, collected by TVA field crews from 1937 to 1943, were catalogued and available for examination. Many others, however, remained in their original collection jars, unsorted, and unidentified. Etnier and his team spent two weeks completing the identification of the specimens, which launched the close cooperation with fish specialists at TVA and UT that continues to this day.

As the event ended, Chris Cox, director of development in the College of Arts and Sciences, announced the Etnier Endowment Challenge.

“Professor Etnier’s vision is to grow the endowment to $100,000,” Cox says. “Today, that vision comes one step closer to becoming a reality with a matching challenge from David and his wife Liz. We ask you to be an advocate for the Etnier Ichthyology Collection and help us achieve the Etnier’s vision and be part of the legacy here in Tennessee.”

For more information about the collection, visit the Etnier Ichthyology Collection website.