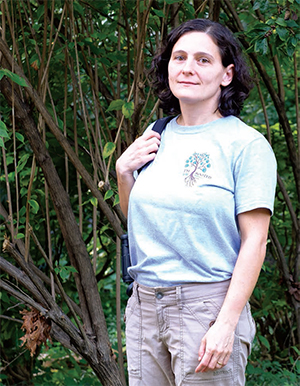 After spending nearly six years at Oklahoma State University, Assistant Professor Monica Papeş has traded the Cross-Timbers and Great Plains ecoregions for the Appalachians and Blue Ridge ecoregions by joining EEB in January 2017. Consequently, her regional research focus has shifted to the Great Smoky Mountains National Park, where Papeş and her master’s student Mali Lubic are beginning to investigate the effects of the 2016 fires on understory plant communities.

The US Forest Service classified the fire intensity from Landsat satellite imagery into three categories: low, medium, and high. High-intensity fires are more likely to occur after extended periods of fire suppression, which is the case in the national park. This study will compare plant species richness and abundance on sites selected across regions of low, medium and high fire intensity to unburned reference sites. The main objective is to determine whether significant differences exist in plant community changes across the fire gradient as these communities recover from the fire. This work is part of a larger EEB initiative to investigate the effects of the 2016 fire on organisms and ecosystems in the park.

On a much broader scale, Papeş is investigating the use of satellite imagery to map tropical forest diversity. This project makes use of data collected by a NASA experimental sensor, Hyperion. This is the only satellite sensor that records the amount of light reflected off the surface of Earth in hundreds of narrow spectral bands. This type of data allows identification of tree species and measuring vegetation diversity from space. The goal of this project is to identify areas of high species richness that could be targeted for conservation.

Moving to UT has been a remarkable career advancement for Papeş. Through a partnership between EEB, geography, and NIMBioS, Papeş has the unique opportunity to establish and direct a shared facility centered on spatial analysis: Spatial Analysis Lab (SAL). Spatial analysis makes use of geo-referenced data to visualize and study processes (for example, species’ geographic ranges; the spread of a disease; optimal size of a protected area). The SAL will be open to all UT faculty and students and will be fully operational by the end of 2018.

Papeş’ research interests focus on understanding species’ distributions from local to continental scales. This fundamental question has applications in diverse fields, such as biogeography, biodiversity conservation, and global change. EEB faculty are a dynamic and diverse group that excel in these fields.