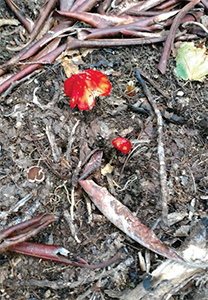 In late November of 2016, a single spark started a fire on a mountain in the Great Smoky Mountains National Park (GSMNP) that quickly became one of the largest natural disasters in the history of Tennessee. When it was finally over, the wildfires burned close to 18,000 acres in and around the Park, destroyed over 2,400 buildings, and claimed 14 lives. They were the most deadly and destructive wildfires in the Southeastern United States in 2016.

For faculty in the Department of Ecology and Evolutionary Biology, the fires sparked unique opportunities for ecological research and discovery from fungi and soil microbes to plant communities and invasive ecology.

Fungi play two roles in the environment. They decompose organic matter and return nutrients to the soil. Fungi also have a symbiotic relationship with plants and provide them with essential minerals and water in exchange for sugar.

“Fungi are an understated, but essential part of the environment,” says Professor Karen Hughes, who is working with colleague Brandon Matheny and a team from the University of Illinois to understand why a completely new group of rapidly growing “fire-response” fungi are appearing.

Fires are rare in the Smokies, since 1934 when the National Park Service established the GSMNP, mainly due to a change in perception of fire and its role in ecosystem health. The high-intensity fires that raged through the Smokies destroyed most fungi in the fire zones, which gives Hughes and her team an opportunity to study new “fire-response” fungi which appear after the fires and if they are different from those in the Western United States where fires are more common.

“We are identifying fire-response fungi that may be ‘new to science’ and documenting other fungi that are enhanced rather than destroyed by fire,” Hughes says. “The health and recovery of the forest depends on fungi being restored to the soil. The normal processes of decomposition and symbiosis must be re-established if forests are to recover.” 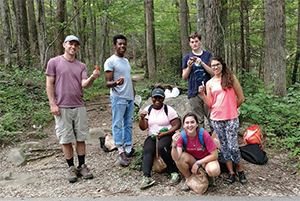 The soil these fungi grow in is the focus of Jen Schweitzer’s research in the Smokies. With exploratory funding from the UT Office of Research, Schweitzer, an associate professor in EEB, Hughes, and other researchers from UT’s Department of Civil and Environmental Engineering are examining soil properties and processes in sites ranging from non-burned areas to areas with low-, medium-, and high-intensity burns.

“Our research is focused on the dual impacts, together and in isolation, of the effects of fire and urbanization on soils, soil microbial communities, and soil-plant interactions,” Schweitzer says.

Fire and urbanization are two widespread disturbances that are increasing due to climate change and the growing number of people living in cities. Researchers, however, rarely have a chance to examine their effects together. The proximity of Gatlinburg to the Smokies provides Schweitzer and her team a unique opportunity to study the impacts. Most of what researchers understand about fire is based on studies in the arid Western United States, but the results will most likely differ from studies in the mesic areas of the Southeastern United States.

“An additional opportunity with these sites in the urban-wildland fire gradient is to examine the independent and combined roles of fire and urbanization as selective forces on plant evolution,” Schweitzer says. “There is almost no information about population-level evolutionary responses to these disturbance events. With increasing disturbance around the globe, understanding the long-term evolutionary consequences of fire on plants is critical.”

Understanding what happens to plant communities after a fire event is exactly what Mona Papeş is out to discover. Will the native plants be more successful or will there be more invasive plants in the burnt areas? It is a matter of adaptation and dispersal.

“The fires burned different areas with different intensity,” says Papeş, assistant professor in EEB. “The basic goal is to understand how fire affects plant communities in terms of number and abundance of species.”

“We are interested in the number of plant species, as well as the abundance of species,” Papeş says. “This will allow us to forecast the trajectory of understory plant communities under different intensity fires in the future, which may or may not affect how we use fire as a forest management tool.”

The devastation of the fires still hangs in the air for many people who call the area around the Smokies home. If there is one lesson learned, it is that nature is resilient, and in the Park, it is making a comeback. Whether it will look the same in the future is still an unknown, but EEB researchers are rolling up their sleeves and digging in to find out.

Read more about post-fire research in the Smokies.