Newly discovered much earlier reproduction of this forest pest may explain why it is invasive, reveal why control has failed, and impede future control. 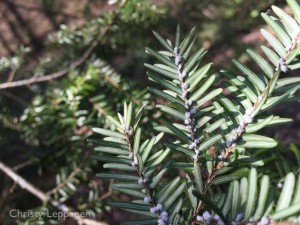 Like its aphid relatives, HWA has a complex life cycle. Reproduction alternates through several sexual and asexual generations. Each generation is made up of a variety of life forms. Completing two generations each year on hemlock, adults lay eggs that hatch from March through June, then develop though four stages before they mature and lay eggs that hatch from May through July. Until now, scientists documented HWA eggs hatching only from March through July.

The newly documented activity occurred in eastern Tennessee during and after record high temperatures, attributed to global climate change and El Niño conditions, where December’s average mean was 53°F with 14 days at least 65°F. Although not proven to be the reason for this newly documented HWA activity, temperature likely contributed in some way. Temperature influences the rate of insect development, distribution, and abundance.  Higher temperatures shorten life cycle stages, sometimes increasing the number of generations each year. More generations create more offspring and may increase insect populations. Alternatively, insect populations may crash when put out of sync with their hosts or when they develop new interactions preventing their survival. 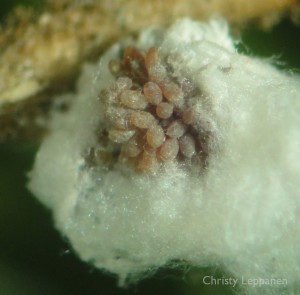 When University of Tennessee researchers Christy Leppanen and Daniel Simberloff discovered eggs hatching in December, they followed populations and determined that this winter’s HWA populations reproduced earlier and more quickly than previously documented.

Reproduction outside of recognized cycles can counteract management because control relies on accurate predictions of pest reproduction, knowing what life stages are present when, so they can be targeted at the most effective times. We are caught by surprise when pests break the rules.

“We visit only a few locations out of the introduced range that extends from Georgia to Maine and couldn’t have been so lucky to happen across the first instance of early winter reproduction,” Leppanen said. “This likely occurred before, possibly increasing populations at times or in numbers that overwhelmed existing population controls, including beetles deliberately introduced to eat them, and contributed to HWA’s escalation from ‘introduced’ to ‘invasive’ in the East.”

Events like this challenge current HWA control focused on matching natural enemies like the introduced beetles with HWA population cycles. Control using natural enemies has not yet proven successful, possibly because HWA reproduction has not been sufficiently synchronized with enemies able to respond in time, place, and densities necessary to reduce HWA populations. And while earlier reproduction that occurs regularly is predictable, reproduction on the fly in response to changing conditions, such as temperature fluctuations, is difficult to anticipate. So, the frequency and regularity of “extragenerational” reproduction must be understood.

After their discovery, Leppanen sent a mass email to a group of HWA researchers and managers on December 31, 2015, New Year’s Eve. An immediate response came via dozens of “Out of Office” replies. Simberloff asks, “Could similar events in other years have gone unrecorded because HWA life cycles were not synchronized with researcher activity periods?”

Dr. Christy Leppanen is a Postdoctoral Research Associate working in the laboratory of Dr. Daniel Simberloff, the Nancy Gore Hunger Professor of Environmental Studies, in the Department of Ecology and Evolutionary Biology at the University of Tennessee. 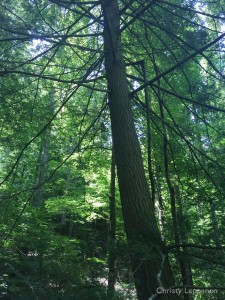 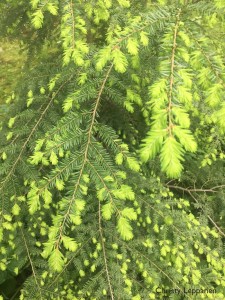