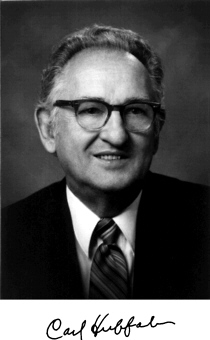 Among the pleasures of working in UT alumni relations are the occasions when long, lost alums or their families come back to campus and we get to revisit the old sights and introduce them to the new show. Last summer, Tom and Claire Huffaker, a son and daughter-in-law of Carl Huffaker (’38, ’39), made their first visit to see the university that Huffaker, who died in 1995, had remembered fondly. They had made their pilgrimage to Knoxville to learn more about a story that was an important part of their family lore.

As Carl Huffaker had always told it, he had graduated from high school in Kentucky in 1933, worked a half year for Civilian Conservation Corps, part of FDR’s New Deal, and then a few months for the Tennessee Valley Authority, another part of FDR’ New Deal, preparing land for inundation behind Norris Dam, which was then under construction about 30 miles north of Knoxville. Huffaker, a farm boy fascinated by insects, wanted to enroll in UT’s entomology program, one of the better programs in the region. But he couldn’t afford out-of-state tuition.

Huffaker said he met with UT’s president and proposed that, if he were allowed to pay in-state fees, he would make Tennessee proud. “You seem like a fine young man,” the president had replied. “You have a deal.” Tom and Claire Huffaker didn’t know the name of the kindly president or any other details about this meeting in 1934—only that it made the rest of Carl Huffaker’s life possible and caused him to speak fondly of UT.

Huffaker had gone on to earn two UT degrees—his bachelor’s in entomology in 1938 and a master’s in plant ecology in 1939. He earned his PhD in entomology/ecology from Ohio State in 1942 and taught entomology at the University of California at Berkeley for five decades, carrying out groundbreaking research and becoming a national leader in his field.

Since I had worked for TVA and valued its history, especially from its inception in the darkest days of the Depression, I was especially interested in showing the Huffakers around campus. When I met Tom, I learned quickly that he had been born and raised in Berkeley, California, where his father had been a longtime professor. I was pleased to learn that Tom was not only born in the same year that I was, 1956, but he was also, a “late hatch (pioneer language),” as his father put it in a family remembrance—born a few years after his older siblings.

We started at the Hill, where Carl Huffaker had had his entomology classes and labs. When we passed the John C. Hodges Library, I noted that Huffaker would have taken freshman English from Hodges or a professor following Hodges’ innovative method of marking papers that in 1941 became the Harbrace College Handbook. When we came to Neyland Stadium, where freshman English papers had for decades been stored in a vault, Tom mentioned that his father had worked in a dining hall that served the football team, a job that came with one healthy meal per day. Huffaker often recalled in later years that, lacking any money, for the rest of each day after his meal at the dining hall, he was always hungry. In those Depression years, others had it worse, but his childhood had prepared him well to get by in tough times.

A Hardscrabble Childhood on the Farm

Huffaker had been born in Monticello, Kentucky, on September 30, 1914, the fifth of six sons of Dewitt and Elizabeth Huffaker. Dewitt was shot to death when Carl was three, leaving Elizabeth to raise her boys alone. Augmenting the income from the family farm as a county clerk—the county’s first female elected official—she was determined to provide her sons the wherewithal to rise above their rural poverty.

While his brothers were unruly mountain boys, Huffaker had suffered a torn Achilles tendon as child, which left him physically impaired and inclined to studiousness, even after he had the tendon repaired as a young adult. As a child, he grew intrigued by the pigeons that roosted in the barn, which led to a lifelong passion for pigeon racing. Huffaker had also been intrigued by the impact of pests on agriculture. In a Monticello High biology class, he took special note when he read a statement by US Department of Agriculture entomologist Leland Ossian Howard that his field would need many young people in future years.

With jobs scarce in 1933, Elizabeth had signed her son up for a six-month tour with the Civilian Conservation Corps after high school. Huffaker and some of his friends were sent to California, where he built campgrounds and did fire-lookout scouting in an isolated back canyon close to Glendale. Of his $30 monthly pay, he was given $5. The rest was sent home to his family, as was the CCC custom of the day.

When Huffaker returned home, his mother presented him with his $150 of earnings and instructed him to go out and get an education. She also signed him up for another New Deal program, the TVA, and its first project, Norris Dam, in Clinton, Tennessee. “My first job was to work in the reservoir clearance program,” wrote Huffaker. “Because of my interest in entomology and botany, I was assigned to survey the whole 800-mile reservoir shoreline for malarial mosquitoes and debris collected on the banks, which was important to the malarial mosquito breeding.”

An Act of Kindness, Never Forgotten

Drawn to the University of Tennessee’s entomology program, Huffaker enrolled that fall but found that, with just $150 he could not afford out-of-state tuition.

Tom asked me what the difference would have been in 1934. I asked Research Librarian Alesha Shumar, who sent us pages from the UT Record. Out-of-state tuition was then $171 a year, plus $75 in registration fees. Tuition was free to in-state students. Registration fees were $45. Dorm rooms were $25-$30 per month for all male students.

With a little research, I also found that the president Huffaker met with was Harcourt Morgan. Perhaps by lucky happenstance, Morgan was a professor of entomology (and zoology) and one of the three charter directors of TVA. It seemed likely to me that Huffaker had impressed Morgan by describing his TVA work in mosquito remediation the summer before. Huffaker was certainly lucky that, in his TVA role, Morgan was a visionary of sorts, committed to revolutionizing the economy, the river system, the soil, and the farming practices of the Tennessee Valley.

In 1936, while still a student, Huffaker had married Saralyn Knight, a Maryville College student he met while they were both working on Norris Dam. Huffaker worked at night in a blue-printing machine laboratory and spent three summers, beginning in 1937, working on malaria control for TVA. They had a son, Ronald, in 1938, another son, Hal, in 1940, and a daughter, Carolyn, in 1942, when Huffaker earned his PhD from Ohio State.

During the war years, Huffaker worked on antimalaria efforts in Colombia, Haiti, and the Dominican Republic. “Carl was amazing in his ability to analyze large amounts of complex experimental data and quickly reach accurate, sensible conclusions,” said a colleague.

Huffaker joined the University of California in 1946. His first assignment, in partnership with the US Department of Agriculture, was to lead the effort to biologically control the Klamath weed, also known as St. John’s wort, which had become a scourge on California range lands. By introducing insects that fed exclusively on the weed, they were able to eradicate the problem. It was the first of many of Huffaker’s innovations in biological pest control that led to incalculable benefits to agriculture, especially in California.

He was among the first entomologists to study the use of DDT to control mosquito populations. Then, after DDT was banned, he played a pioneering leadership role in developing and introducing his seminal proposal on Integrated Pest Management, or IPM. In a six-year project that drew on the expertise of hundreds of scientists from various disciplines and culminated in the 1978 proposal “The Principles, Strategies, and Tactics of Pest Population Regulation and Control in Major Crop Ecosystems” outlined a methodology for, as described by George Kennedy in the summer 2004 issue of American Entomologist, “improved, ecologically oriented pest-management systems that optimized long-term costs and benefits of crop protection to the farmer, society, and the environment.”

The Huffaker Project, as it came to be known, “played a seminal role in training IPM scientists and building the infrastructure necessary for the continued development and adoption of IPM in the United States.” A member of the National Academy of Sciences, Huffaker published hundreds of papers. He retired from Berkeley in 1984 but remained active on campus until his death on October 10, 1995.

As we returned to Tyson Alumni House, I thanked the Huffakers for the opportunity to show them around UT. “My father loved this place, and what it did for him,” said Tom. “He said he would always make Tennessee proud, and I think that throughout his life he wanted to make sure that he did. We wanted to visit UT partly to say that our family has never forgotten what Tennessee did for my father, and we never will.”

After their visit the Huffakers made a gift to UT, matched by Tom’s employer, Exxon-Mobil, to go toward scholarships for entomology students.