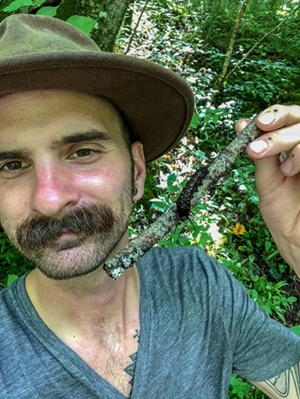 Jonathan Dickey, a graduate student in the Fordyce lab, investigates the mediation of pollinator network assembly by rhizospheric soil microbiota through reproductive plant traits and aboveground fitness consequences in the genus Salvia. He demonstrates this by sampling soil microbiomes of Salvia lyrata at various phenological stages of development while measuring traits like photosynthetic biomass and floral abundance.

“We have seen before that the main driver of pollinator visitation and community composition relative to ecoregion and soil context is driven by plant composition, floral traits, and rewards, but how do belowground communities influence plant distribution and relative attractiveness towards insects?” Jonathan says.

Jonathan plans to quantify soil microbial communities based on 16S rRNA gene abundance using Illumina next-generation sequencing for each plant replicate per phenological stage. Jonathan’s exploration of community assembly with Salvia lyrata is multidisciplinary and connects community ecology with population level, evolutionary processes like the phenotypic selection. Furthermore, he has been optimizing a protocol for seed sterilization and germination for the genus Salvia by repeated processes that include seed coat surface sterilization and heat treatments to remove all potential endophytic microbiota. Upon successful germination, Jonathan plans to use soil microbial slurries associated with juveniles and flowering individuals to measure flowering time, abundance, corolla tube length, and ultimately pollinator visitation rates.

Additionally, he uses species distribution modeling (SDMs) to inspect how nutrient based mutualisms can breakdown in future climate scenarios. Through this exploration, he explicitly states the spatial extent at which potential niche divergence could occur in Eastern North America and the implications for conservation and effects on higher trophic levels. From yet another avenue, Jonathan is writing an R package employing MuSSE, a phylogenetic method, to analyze population size as a trait dependent on the presence of a stress-tolerant gene. The utility of this package is versatile and can provide a nuanced look at community disassembly in light of climate change or various disturbance events.

“We’re just now beginning to fully appreciate the vital role that microbial communities play across levels of ecological organization,” Fordyce says. “Jonathan’s project, entirely of his own design, is timely and novel. I’m looking forward to seeing what he discovers.”