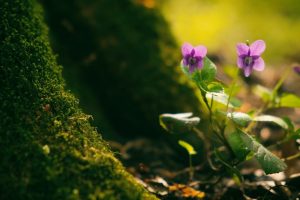 “The Mercer Award is one of ESA’s most prestigious awards,” Kalisz said. “We were all thrilled that our paper was chosen.”

Co-authors and co-awardees include Caitlyn MacKenzie from the University of Maine, Jason Fridley from Syracuse University, and Richard Primack from Boston University.

Researchers leveraged the integration of historical records and contemporary experiments on many wildflower species to see how the overstory and understory responded differently to climate change and the unexpected consequences that followed. They used historical phenological observations, the oldest of which were made by Henry David Thoreau in the 1850s, alongside long-term temperature records, contemporary garden experiments from Kalisz’s NSF LTREB funding, and a simulation model.

“Our model projects a 10-48 percent reduction carbon gain and lower fitness for forest wildflowers in the coming century,” Kalisz said. “This happens because the overstory leaves emerge in response to warming spring temperatures, which limits the later emerging understory wildflowers’ photosynthesis, creating a phenological mismatch.”

The George Mercer Award is given for an outstanding ecological research paper published by a younger researcher, with the lead author 40 years of age or younger at the time of publication. The paper must have been published in 2018 or 2019 to be eligible for this year’s award, which will be presented in August 2020 at ESA’s (virtual) annual meeting along with a video depicting the work. Heberling and Mackenzie, both younger researchers, will share the monetary prize.