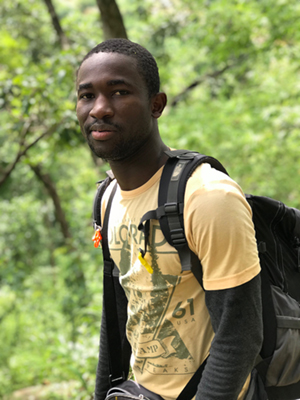 Jacob Moutouama was born and raised in the Atacora Mountain chain, a biodiversity hotspot of Benin in West Africa. Several important species live in the area, but they are biologically endangered, as Benin is also a threatened ecosystem.

Jacob first became sensitive to conservation issues in his community after an internship with the Benin National Forest Office and his participation in Tropical Biology Association Courses. He developed a particular interest in the impact of human disturbance on rare species. Jacob’s experiences inspired him to pursue further training and to perform research that can positively impact conservation in the tropics, so he applied to become a doctoral student in the UT Department of Ecology and Evolutionary Biology.

In fall 2018, he joined the department as a PhD student and member of the Gaoue Lab. Through his research, Jacob seeks to understand the evolutionary and ecological mechanisms that limit species ranges. To do so, he studies Thunbergia atacorensis, an endemic plant of West Africa in a research system that aims to understand how biotic and abiotic factors can explain weak population dynamics at the edge of species ranges. His research approach includes manipulative and common garden experiments, field demographic data, structural equation models, and developing integral projection models.

“Even though I have only been here a year, I have been accepted warmly into the department and Professor Gaoue’s lab,” Jacob said. “I’ve made lifelong friends and mentors and the support I have at UT has helped me to be very productive.”

In his first year of the PhD program, Jacob has already received seven grants and the Best Progress Toward a Dissertation award from the EEB department.