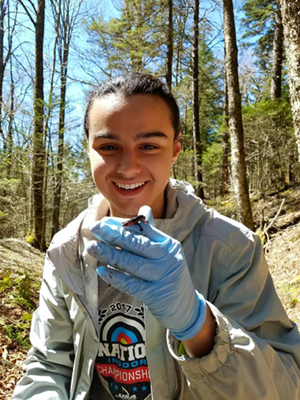 Using the genus Collinsia as a model, the Kalisz lab investigates the ecological causes and genetic and genomic consequences of mating system divergence between closely related sister species pairs. Daniel added a new dimension to ongoing studies on the evolution of plant mating systems. His research asked if senescence differed between outcrossing and selfing mating species using pollen performance as the metric. An outcrossing mating system relies on a vector to move pollen among flowers, while selfers autonomously move pollen within the same flower.

“Daniel arrived in our lab the first day of his freshman year on fire,” Kalisz says. “He was eager to learn the research ropes and do his own project. His research produced novel, surprising, and soon-to-be-published results: selfers pollen does not show senescent decline, while outcrossers do!”

In the UT Center for Wildlife Health (CWH), Daniel studies amphibian disease epidemiology. Currently, he is helping determine the potential impact a recently discovered fungal pathogen (Batrachochytrium salamandrivorans) may have on endemic salamander species. Using disease epidemiology models, the Gray-Miller Lab hopes to thwart invasion of this pathogen should it ever reach North America. Daniel’s senior thesis project focuses on the probability of disease transmission via direct contact between salamanders as the disease progresses.

“It has been a privilege to co-mentor Daniel with Dr. Debra Miller,” says Gray, associate director of the UT CWH. “We look at all undergraduate researchers as significant and important components of the CWH, capable of advancing the frontier of science.”

“I strongly encourage any motivated student to look into participating in undergraduate research with a professor whose research they find interesting,” Daniel says. “My participation in these two research labs has been the highlight of my undergraduate experience. I feel very privileged to have had this opportunity to engage with such an incredible faculty and staff. I hope to take everything that I have learned with me to graduate school next fall.”