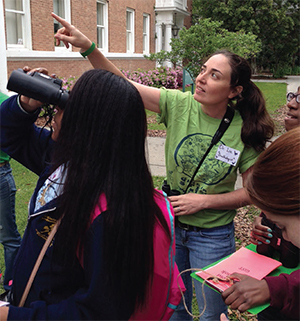 Derryberry (center, back) identifying songbirds during a workshop with middle-school students.

A songbird belting out its song – whether from the top of a tree in a forest or on a street corner downtown – is what motivates new Assistant Professor Elizabeth Derryberry’s research program.

“People always smile when I tell them my lab studies bird song and then immediately ask if I can identify this one bird that always wakes them up in the morning,” Derryberry says.

Apart from its general appeal to the public, bird song is a fascinating behavior with many parallels to human language.

“Many birds learn their song, just as children learn their words: from their parents,” Derryberry says. “A bird’s song has become an important model for how traits can change through mistakes and innovations made across generations – known as cultural evolution – not just genetic changes.”

Because cultural evolution can happen much more rapidly than genetic evolution, researchers use culturally evolving traits to measure rapid responses to environmental change. Derryberry does just that in her lab by examining how songs change in response to noise pollution, which is a global issue.

Over the past five years, she has studied the effects of noise pollution on song, using a common songbird that persists in the urban parks of San Francisco – the white-crowned sparrow. Her group finds that songs have increased in pitch and become narrower in their frequency range over the past 30 years. Birds hear these songs at greater distances in low-frequency urban noise. These changes come with a cost, however, as female sparrows prefer songs with a broader frequency range, most likely because such songs are more difficult to produce. 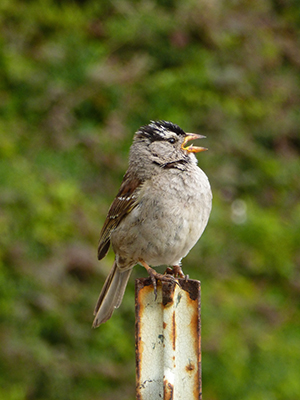 White-crowned sparrow male singing above the din in San Francisco

“One of the best parts of this project was that I had the opportunity to conduct an experiment to test whether cultural evolution really can explain these changes in song over time,” Derryberry says.

In her lab, she raised nearly 50 baby songbirds over two years in different noise environments and demonstrated that birds preferentially learned songs least masked by noise in their environment. Once they learned that song, however, they did not change it even when their noise environment changed.

“Let’s just say that feeding 50 baby birds every half hour dawn to dusk was good training for developing a work-life balance,” Derryberry says.

As her team worked in the field setting of urban San Francisco, heat waves were a serious issue. The fact that heat waves are increasing in frequency and magnitude across the globe has inspired a new line of research in Derryberry’s lab. Her team, along with former postdoc and collaborator Ray Danner at UNCW, is now studying how heat stress affects singing and mate choice behaviors in songbirds.

“Our initial findings are really exciting, and suggest both cognitive and motor impairment at temperatures experienced in current heat waves,” says Derryberry, who looks forward to pursuing these questions at UT as the research breadth and strength of the department promises many great collaborations.