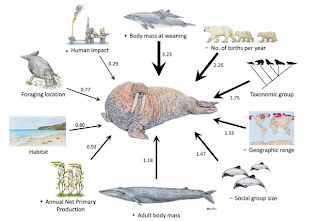 Alison Boyer, Research Assistant Professor in the UTK EEB department, recently coauthored a paper in PNAS on the drivers and hotspots of extinction risk in marine mammals.

Abstract:
The world’s oceans are undergoing profound changes as a result of human activities. However, the consequences of escalating human impacts on marine mammal biodiversity remain poorly understood. The International Union for the Conservation of Nature (IUCN) identifies 25% of marine mammals as at risk of extinction, but the conservation status of nearly 40% of marine mammals remains unknown due to insufficient data. Predictive models of extinction risk are crucial to informing present and future conservation needs, yet such models have not been developed for marine mammals. In this paper, we: (i) used powerful machine-learning and spatial-modeling approaches to understand the intrinsic and extrinsic drivers of marine mammal extinction risk; (ii) used this information to predict risk across all marine mammals, including IUCN “Data Deficient” species; and (iii) conducted a spatially explicit assessment of these results to understand how risk is distributed across the world’s oceans. Rate of offspring production was the most important predictor of risk. Additional predictors included taxonomic group, small geographic range area, and small social group size. Although the interaction of both intrinsic and extrinsic variables was important in predicting risk, overall, intrinsic traits were more important than extrinsic variables. In addition to the 32 species already on the IUCN Red List, our model identified 15 more species, suggesting that 37% of all marine mammals are at risk of extinction. Most at-risk species occur in coastal areas and in productive regions of the high seas. We identify 13 global hotspots of risk and show how they overlap with human impacts and Marine Protected Areas.