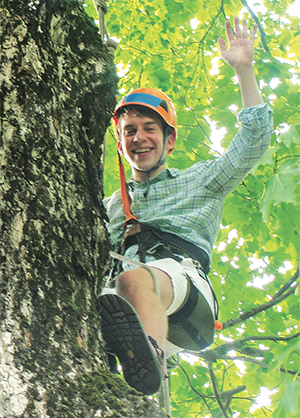 For the past year, Patrick Mckenzie, a senior in the EEB program, worked in the Armsworth Lab on his undergraduate research project based on data collected throughout southern Appalachia by fellow and former lab members.

The data, which were collected from areas protected by The Nature Conservancy, includes information about individual trees across nine states. Also included are descriptive characteristics – such as elevation, latitude, and area – for each protected site. In his project, Mckenzie tests whether the elevation range within a given site does a good job of explaining tree diversity within that site.

He’s received lots of feedback and support for the project within EEB – from opportunities to present throughout the department to presentations at research conferences. In addition to supplementing his research experience, Mckenzie credits faculty within EEB for helping prepare him for life after undergrad.

“I hope to attend graduate school after I get my degree, and the personal attention from professors within the department has helped guide the early stages of my application process,” says Mckenzie. “The weekly guest seminars helped me meet other researchers from around the country. The connections I’ve made and the research I’ve done as an undergrad in EEB have helped me approach graduate school confidently and to feel like part of the broader EEB community.”

In May, Mckenzie received the EEB Undergraduate Award for Professional Promise at the annual EEB awards ceremony. He also received an honorable mention in the national Goldwater Scholarship program, which is the most prestigious undergraduate scholarship in the natural sciences, mathematics, and engineering in America.

“Patrick is as good as any undergraduate that I have encountered in the EEB major program to date,” says Paul Armsworth, professor and director of the Armsworth Lab. “He is right up there with our very, very best.”