A number of lichen specimens collected by Ravenel in the late 1880s have been found in the UT herbarium (TENN).  The specimens were found during databasing of the lichen collection as part of an NSF-funded effort to database the lichens and bryophytes of North America. 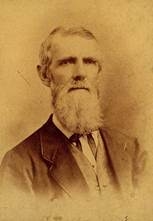 Henry William Ravenel (1814-1887) was one of the foremost botanists of the American Civil War era.  Ravenel was a dedicated botanical collector, amassing specimens totaling 11,000 species.  Today, the University of South Carolina is home to the last intact portion of Ravenel’s herbarium containing over 6,200 individual plant specimens along with his journals and correspondence.  Because he bridged the transition in botanical research from gentlemen-amateurs to professional scientists, Ravenel continues to provide important insights into both the taxonomic study of fungi and the evolution of science.