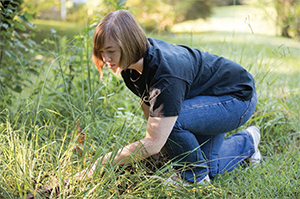 By her senior year Hannah Anderson, an EEB major, had already been involved in several projects. She started in the Riechert Lab where she continues to maintain a large population of spiders under the guidance of graduate student Angela Chuang. Frequently left in charge of the lab in Angela’s absence, Hannah has been learning many of the more practical concerns required for maintaining a living population in a lab setting and the process of collecting living samples.

Hannah has also been involved in a project in the Simberloff Lab exploring the behavior of the native green anole and responses to the invasive brown anole. Though her time on this project was relatively brief, it provided invaluable knowledge regarding the study of animal behavior in a natural setting and the complications therein. The grant application process and protocol review by the Institutional Animal Care and Use Committee (IACUC) also gave Hannah additional experience.

Hannah did not stop there. In the fall of 2016, she took a Comparative Animal Behavior lab, where groups work together to create research projects. Though the class is over, Hannah has not let the project end. With the help of Professor Todd Freeberg, Hannah works directly with graduate student Johnathan “Alex” Grizzell and uses all of the experience she has gained up to this point to help design a field experiment exploring the behavioral responses of native birds to anthropogenic noise. During background research, Hannah noticed something odd in the scientific literature: though there had been many studies on the effects of anthropogenic noise on various organisms, most of them used modulated white noise as a replacement for anthropogenic noise. There were virtually no studies, except for one on frogs, that tested whether or not white noise was a suitable replacement for anthropogenic noise. Using a playback experiment, Hannah is attempting to prove that the two are not equivalent when it comes to Carolina chickadees and tufted titmice. Hannah intends to use her experience as a fully involved data gatherer and data coder for further research and to publish before she enters graduate school.