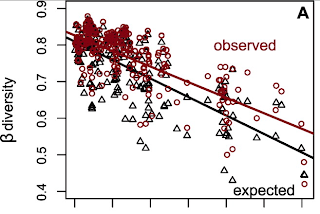 Abstract:
Understanding spatial variation in biodiversity along environmental gradients is a central theme in ecology. Differences in species compositional turnover among sites (? diversity) occurring along gradients are often used to infer variation in the processes structuring communities. Here, we show that sampling alone predicts changes in ? diversity caused simply by changes in the sizes of species pools. For example, forest inventories sampled along latitudinal and elevational gradients show the well-documented pattern that ? diversity is higher in the tropics and at low elevations. However, after correcting for variation in pooled species richness (? diversity), these differences in ? diversity disappear. Therefore, there is no need to invoke differences in the mechanisms of community assembly in temperate versus tropical systems to explain these global-scale patterns of ? diversity.