What’s the difference? How is it that a pest or pathogen can kill its host in one place but not another? Research Assistant Professor Christy Leppanen wants to know.

Leppanen is looking for differences that explain why an invasive insect, the hemlock woolly adelgid (Adelges tsugae or HWA), kills North American eastern hemlocks (Tsuga canadensis) and Carolina hemlocks (T. caroliniana), but not hemlocks from its native range in Asia. 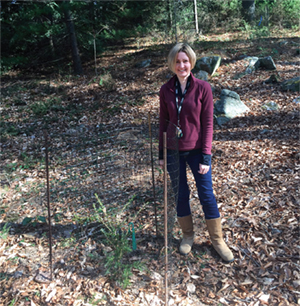 “Simply speaking, I am interested in identifying mechanisms responsible for different outcomes when communities are considered the same,” Leppanen says. “For example, a particular insect pest or biocontrol agent kills its host plant in one location, but not another. We increase the likelihood of success and reduce the risk of negative non-target effects when management takes these mechanisms into account.”

Easier said than done. Including these considerations seems intuitive, but discerning differences in communities is challenging. Populations are influenced by direct and indirect interactions, such as with predators, competitors, pathogens, and microbial communities, or host resistance, all influenced by variation in nutrients, phenology, and climate.

“Difficulty transferring population control mechanisms from one location to another might reflect the fact that differences in these systems might not be inconsequential.”

“The HWA problem embodies many challenges we face managing nature,” Leppanen says. “We have not confirmed which mechanisms control HWA populations in its native range, but specificity associated with effective biocontrol means its interactions and role in population control must be precisely understood. We sometimes feel pressured, however, to implement before we understand. Additionally, approaches sometimes counter one another; for example, chemical control that is often broad spectrum can have broad non-target impacts, even to natural enemies.”

“Collectively, we’ll keep at it. This is interesting and important work, with new tools and technologies and an enthusiastic and engaged group of participants.”

At UT, Leppanen teaches courses in environmental toxicology and invasion biology, the latter with Professor Daniel Simberloff. She is also the author of an award-winning mock scientific journal. The Bulletin of ZOMBIE Research (BOZR) is a collection of deadpan post-apocalyptic articles that uses popular culture to lure readers into learning about research and technical literature, dissolving barriers to accessing and understanding science.