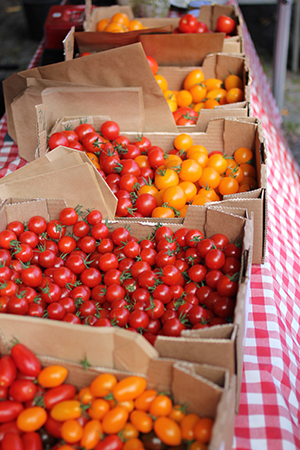 Tomatoes are the heart of many backyard gardens. Tomato crops are also an important economic revenue in North America. The vegetable we all know as the “T” of a great summer BLT, however, may be in jeopardy due to a decline in its pollinator species because of climate change.

According to a study published in Ecological Applications, tomato production is at risk in the Eastern United States due to climate-induced decrease in the richness of buzz pollinators. Approximately 70 percent of the world’s crops depend on insect pollination for production. Climate change is already affecting the abundance of pollinators, but researchers with the National Institute for Mathematical and Biological Synthesis (NIMBioS) wanted to know how climate change impacts the pollination of specific crops.

Wild bees are an essential component of agriculture and especially important for crops whose flowers use buzz pollination to spread their pollen. Also known as sonication, buzz pollination is a process in which the pollinators attach to the anther cone of the flower and contract their indirect flight muscles to produce vibrations. Wild buzz pollinators can increase pollen load, which increases the fruit production and quality of the crop.

“Buzz pollinators provide pollination services for select groups of plants, including several vegetable species,” said Greg Wiggins, education and outreach coordinator for NIMBioS. “Our focus on a specific group of pollinators allows us to highlight potential impacts the changes in distributions of these pollinators may have on agricultural production.”

Climate change already affects many species by forcing them to move in order to keep within suitable climatic conditions. In this study, researchers looked at how potential future changes in climate will impact the distribution of buzz pollinators and what effect that will have on the species richness of tomato crops in North America.

“Studying distributional shifts is especially important for species that pollinate the food we eat,” said Luis Carrasco Tornero, lead author and postdoctoral researcher with NIMBioS. “Our study exemplifies the potential impact of climate change on the production of tomato crops due to the distribution changes of pollinator wild bees. Our findings could serve as an example of individual crop impacts due to lack of overlap between crop plants and their pollinator, which might help raise awareness about the direct impacts of climate change to our lives in the next few decades.”

Researchers applied ecological models and scenarios of future climatic conditions to estimate the potential geographic distribution of the buzz pollinators, which are rarely used to investigate possible effects of climate change on plant-animal interactions and food production.

“We show that the magnitude of change projected by different scenarios varies across species, thus this variation needs to be taken into account when working at the community level, with multiple species,” said Mona Papeş, assistant professor in the UT Department of Ecology and Evolutionary Biology. “Our models estimated a decrease in the number of pollinator species in several regions across the US where field tomato crops are grown on a large scale.”

Beyond tomatoes, ecological niche models can be used to assess potential impacts of climate change on other crops that depend on buzz pollinators, such as peppers, eggplants, or potatoes. It also has applications outside agricultural systems.

“Our work further supports the growing body of evidence showing the potential detrimental impacts climate change can have on natural systems,” Wiggins said.

Researchers will continue their work in pollinator distribution and plan focus their next study on what factors contribute to the ability pollinators have to shift their distribution in the face of climate changes.

“We hope our results from the next project can help conservationists find solutions to manage pollinator populations and avoid local extinctions of some pollinator species,” Carrasco said.

The research project was supported by a NIMBioS Summer Research Experiences (SRE) program that provides undergraduate students from across the US the opportunity to spend eight weeks during the summer working in small teams on research that incorporates mathematics to answer questions about biological systems. Undergraduate students from three other universities participated in the research and are co-authors on the paper.

Photo by Robert Kalinagil on Unsplash