Anna Killeen Cameron is an undergraduate researcher who has worked in the Simberloff and Leppanen lab for the past year on a media analysis related to information about the management of the hemlock woolly adelgid. 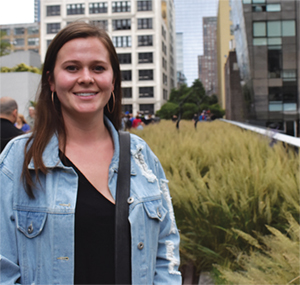 The hemlock woolly adelgid (Adelges tsugae) is an invasive insect that is devastating hemlock populations (Tsuga canadensis and T. caroliniana) in eastern North America. Anna and fellow students in the lab analyzed the type and frequency of information presented by the media, including newspaper, radio, and television. In April 2018, they presented posters about their research at UT’s Exhibition of Undergraduate Research and Creative Achievement (EURēCA).

Anna also spent the summer conducting research with EEB PhD candidate Angela Chuang, Professor Leppanen, and EEB undergraduate Casey Fellhoelter. They studied the behavior of a parasitoid wasp and its interaction with the orb weaver spider, Cyrtophora citricola, which is invasive in Florida. The wasp (Philolema sp.) is a newly identified species, so the information gathered about the wasp will contribute to its future species description. Her work to understand the interactions between the wasp and the orb weaver spider are also important in determining whether the wasp could be used as a potential biological control of invasive C. citricola populations.

“Undergraduate research has been one of the best parts of my undergraduate experience. I’ve built great relationships with fellow students and with professors who I now consider to be mentors. It has challenged my way of thinking and has provided me with skills I would not have developed otherwise,” says Anna, who looks forward to her senior year at UT and hopes to continue to gain more field and research experience.