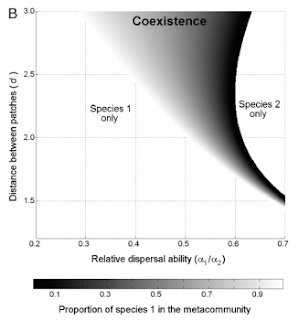 A recent paper in the Proceedings of the National Academy of Sciences by Michael Bode, Lance Bode, and UTK EEB assistant professor Paul Armsworth examines a novel mechanism that maintains diversity in patchy habitats. Abstract is below. See the full paper here.


Abstract: The coexistence of multiple species on a smaller number of limiting resources is an enduring ecological paradox. The mechanisms that maintain such biodiversity are of great interest to ecology and of central importance to conservation. We describe and prove a unique and robust mechanism for coexistence: Species that differ only in their dispersal abilities can coexist, if habitat patches are distributed at irregular distances. This mechanism is straightforward and ecologically intuitive, but can nevertheless create complex coexistence patterns that are robust to substantial environmental stochasticity. The Great Barrier Reef (GBR) is noted for its diversity of reef fish species and its complex arrangement of reef habitat. We demonstrate that this mechanism can allow fish species with different pelagic larval durations to stably coexist in the GBR. Further, coexisting species on the GBR often dominate different subregions, defined primarily by cross-shelf position. Interspecific differences in dispersal ability generate similar coexistence patterns when dispersal is influenced by larval behavior and variable oceanographic conditions. Many marine and terrestrial ecosystems are characterized by patchy habitat distributions and contain coexisting species that have different dispersal abilities. This coexistence mechanism is therefore likely to have ecological relevance beyond reef fish.